If you’ve been reading along for a while, you know that my son Ev, 28 months, has been a bit of a late talker. He has never been delayed, but he has always liked to sitÂ right on the edge of typical for his age.

My daughter’s speech and language skills have always been solidly average, so this has been interesting for the SLP in me. Though I don’tÂ intentionallyÂ “therapitize” him (my husband laughs when I use that “word”) I have found myself using a LOT of expansions and extensions with him. In fact, my son will continue to say whatever he is sayingÂ over and over until you repeat back what he said so he knows you understand. This is probably partly due to all the expansions and extensions I am doing all.day.long.

I am happy to report that he has FINALLY hit the “language explosion” that most kids hit between 18 months and age 2.Â He doesn’t stop talking. It is so exciting to hear what comes out of his sweet mouth. This morning, for example, we we were laying in bed he heard our dog barking.

But today I wanted to share his new phrase that just melts my heart. 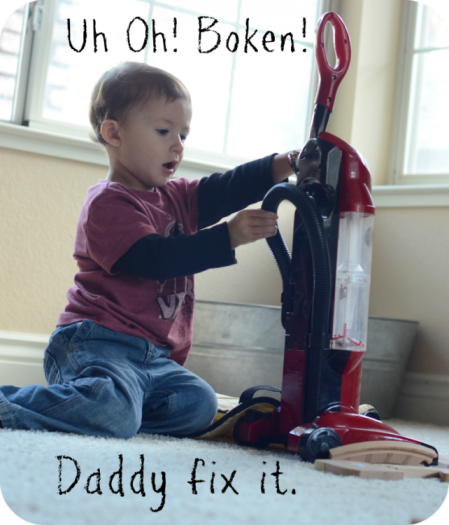 You see, around here sometimes things break or one of the few toys I allow batteries in needs new ones (like the kid’s cameras). When things like this happen, it is common for me to say “Oh no! It’s broken! We need Daddy to fix it when he gets home.”

Everett quickly learned this phrase as a chunk. He started coming up to me and saying “Boken! Daddy. Fix it.” And oh my goodness how sweet it sounds! He started saying this all the time, in reference to a broken tower of blocks, to a broken cup to the toy vacuum cleaner (another one I allow the batteries in).

But then, is when it got awesome. We were at my daughter’s gymnastic class and I gave him a granola bar as a snack. It broke into two piece and Everett started freaking out a bit and said “Boken! Boken!” And then, as if he remembered all of a sudden “Daddy fix it!”

Then a couple mornings ago, I served him his waffles for breakfast and one had an “almost hole.” You know, the waffle is really thin in one area and you can see through it and with just a little push, there would be a hole there? Well…Ev was examining his waffle, and in a very concerned tone told me “Afa boken! Mama, afa boken! Daddy fix it!” (Afa=waffle).

I scooped him up and covered him in kisses, and told him yes, Daddy can fix his waffle later. For now, he should just eat it.

Happy Friday! I hope you all have a fantastic holiday weekend!