TGIF! It has been a looooong week around here.

Sick baby =no sleep for mommy.

Good thing he is cute, right? 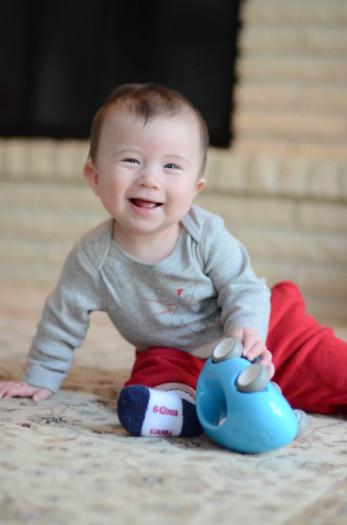 I can’t believe he is 6 months old already!

So this is a quick post, sharing some goodies from around the net I have found the last couple weeks! If you are new to PWW365, I love to share some Â interesting, inspiring, enlightening, or just plain cool stuff that I find while pursuing the interwebs on Fridays. You can go here to see past posts if you’d like!

Coming up next week, I have another installment in my How to Help Your Child Talk series and if I ever get any sleep, maybe more 😉 Until thenâ€¦happy reading!

Enjoying the Small Things: Square Pegs, Round Holes and Raising a Child with Special Needs

I LOVE this post from Kelle of Enjoying the Small Things. I mean,Â I love this post. Kelle explains that deciding what is best for her daughter, Nella, who has Down syndrome isÂ â€œlike putting a square peg in a round holeâ€ and goes on to say:

But then, (Donâ€™t you love â€œbut thensâ€?!) I remembered Apollo 13. Have you seen it? The astronautsâ€™ lives literally depended on fitting a square peg in a round hole. Technically speaking, the lunar moduleâ€™s round receptacles didnâ€™t fit the command moduleâ€™s square filters for carbon dioxide disposal, and CO2 levels were near toxic. Thereâ€™sÂ this scene where these NASA engineers go into a room, dump everything to which the astronauts have access on the table, and are given the challenge of using whatâ€™s on the table to transform the round receptacle to fit the square filter. Itâ€™s an impossible task, but these people are solution-based thinkers and their friends’ lives are at stake.Â And they figured it out.Â They walked out victoriously an hour later carrying a contraptionÂ that was once a non-existent solution. They used duct tape and cardboard and creativity and determination and never once said â€œwe canâ€™t do this.â€ They did it because theyÂ hadÂ to.

You need to read the whole post over at Enjoying the Small ThingsÂ as it’s awesome and will inspire you.

The brain, it seems, immediately filters language sounds into broad groupings, with small neighborhoods of neurons activating at certain sounds. The scientists were able to build brain maps of these sound neighborhoods, showing that the same neurons “lit up” each time patients heard, for example, a specific type of vowel orÂ consonant.

“When we hear sounds or language, our brain is actually organizing this information through very particular filters – neurons that are detecting certain sounds,” said Dr.Edward Chang, a UCSF neurosurgeon and lead scientist of the brain research. “The cool thing about it is you see this real clear heterogeneity in how those neurons correspond to speech. There’s definitely an organization toÂ it.”

There is little scientific research regarding SPD, so this is pretty interesting stuff!

In a groundbreaking new study from UC San Francisco, researchers have found that children affected with SPD have quantifiable differences in brain structure, for the first time showing a biological basis for the disease that sets it apart from other neurodevelopmental disorders.

One of the reasons SPD has been overlooked until now is that it often occurs in children who also have ADHD or autism, and the disorders have not been listed in the Diagnostic and Statistical Manual used by psychiatrists and psychologists.

â€œUntil now, SPD hasnâ€™t had a known biological underpinning,â€ said senior authorÂ Pratik Mukherjee, MD, PhD, a professor of radiology and biomedical imaging and bioengineering at UCSF. â€œOur findings point the way to establishing a biological basis for the disease that can be easily measured and used as a diagnostic tool,â€ Mukherjee said.

Have a fantastic weekend!