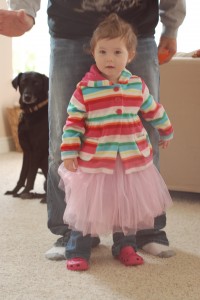 One year ago today, it was a Saturday. I was rather pregnant (due in less than a month) and we were enjoying the post-Thanksgiving holiday weekend. It also happened to be the day before my daughter E’s birthday. She was going to be two. For some reason, her second birthday was hitting me much harder than her first one did. I had been a bit weepy that week, thinking back at the last two years and how much joy this little girl had brought into my life.

Yeah, it was probably the hormones 😉

Anyway, it was Saturday and E had, as she always did (and still does), climbed into bed with us at some point in the night. We all awoke and E slid out of our bed and…

She couldn’t walk. I mean, she could but she couldn’t. She was limping really badly.

This wasn’t the first morning that she had limped…off and on the last couple weeks she had had this limp in the morning, but it always was gone by the time E had finished eating. And it had seemed to have gone away the last couple days so we thought whatever it was, it had gotten better.

That is when Justin noticed she wasn’t extending her right leg, and when he tried to do it for her, she screamed out in pain, And then we saw that her right knee was very swollen.

Yes, it was one year ago today that started us on a roller coaster of events that would eventually end in our baby girl being diagnosed with Juvenile Idiopathic Arthritis.

Since that time, Esella has been through so much…so many blood draws, x-rays, medications, doctors appointments (Pediatricians, Urgent Cares, Orthopedists, Ophthalmologists, Rheumatologists), surgeries, and therapies (physical and occupational). It has been a busy year.

Not to mention she became a big sister too. 🙂 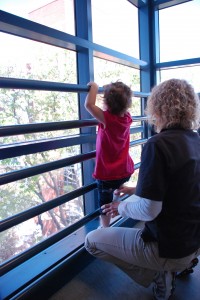 However, as much as we do stay positive and make the best out of her situation and are so very thankful for so much, we would be doing our child a disservice if we just sat back and stayed quiet because “it could be worse, after all.” Well of course it could be worse. No matter how bad you have it in life,Â  somewhere someone will be worse off than you. If everyone who came across an obstacle didn’t stand up and do something about it just because someone else has it worse then nothing would ever change in this world.

I don’t want my daughter to grow up feeling sorry for herself because she has this disease. I want to empower her to make change despite of it. And I want to set that example for her by advocating and educating and fundraising to help find better treatments and hopefully a cure for this disease someday. 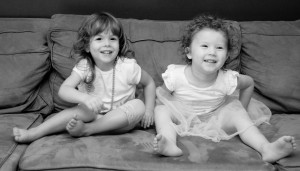 E and B, two JA Warriors!

One of the ways we do this, is by participating in the Arthritis Walk. Last year, we did our first walk.This year, we are participating in both our local walk, AND the Sacramento Arthritis Walk by joining up with Run Bubbas Run, which is E’s friend Bevin’s team. Bevin is just a couple months younger than E and was diagnosed with JA at 21 months old, just over a year ago. The walks are in May and don’t worry, I’ll be posting all about them as we get closer!

Yes, a year ago today would change our lives forever. It would make us stronger.