Today I want to share something that has nothing to do with speech and language, education, or crafty fun…I want to share an incredible story with you. One that gives me hope that there really are kind, caring, selfless people in this world. I won’t lie, there is great sadness in this story, but also hope.

With permission, I am reposting what my friend Kristen posted on her Facebook page on the afternoon of December 7th. I only edited for capitalization. This is a true story, and I am so proud to call Kristen my friend.

Warning: You may need a tissue. Or a box (in my case). 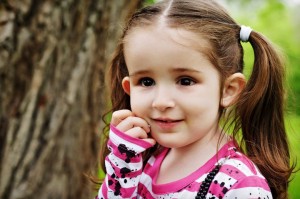 I wanted to share this story with you guys. My friend’s daughter has terminal cancer and I wasnâ€™t sure what to give her for her 3rd birthday. What follows is the story of what I decided to give her, and also the amazing story of how it all happened… 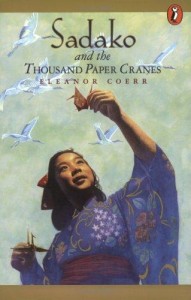 I wanted to do something for Peytonâ€™s birthday but I couldn’t think of anything that was significant enough to give her. Sending toys or clothes just seemed so trivial and what I really wanted to give her, the gift of a long, healthy, happy life, I couldn’t. It was then that I remembered the story of Sadako and the 1000 paper cranes. If you donâ€™t know the story, it is a true story about a little girl, Sadako Sasaki. She was two years old when the bomb was dropped on her home city of Hiroshima on August 6, 1945. Sadako seemed to escape any ill effects after her exposure to the bomb, until, ten years later; she developed leukemia, “the atom bomb disease.”

When she was in the hospital, her friend brought her a folded paper crane and told her the story about it. According to Japanese legend, the crane lives for 1000 years and if you fold 1000 paper cranes, you can make a wish that a sick person will become well again.

With that story in mind, I couldn’t pass up any chance to try to make Peyton well again, so I decided I was going to make her 1000 paper cranes for her birthday. The only problem was that I had no idea how to make a paper crane! So I looked at step by step instructions online and followed as best I could. Following those directions, I was able to make a paper craneâ€¦in 5 days! At that rate, I knew I would never reach 1000, so I asked if there were any of my middle school art students who could make paper cranes. A few of them did and taught me how to do it. They asked me why I wanted to make them and I explained about Peyton and the legend of 1000 paper cranes. They were so touched that they asked if they could help too. As we were making paper cranes, other students saw or heard about Peyton and wanted to learn to make paper cranes too to help us send 1000 to Peyton. 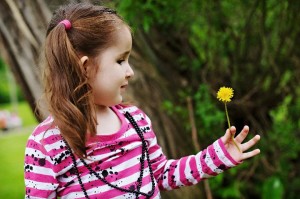 Inside the box I sent to Melissa [Peyton’s mother] were 1000 paper cranes, made lovingly by myself and some of my students. Some of the cranes are made really well, by kids who have made many before. Also in the box are some of the very first cranes that some of them had ever made, including my first crane that took me 5 days to make. Regardless of the rough craftsmanship of some of the cranes, each one was made with love and with the hope that somehow the legend of making 1000 paper cranes might help make Peyton better.

The story of how we got to 1000 is nothing short of amazing. We only had a few weeks to make the cranes in order to get them to my friend around Peytonâ€™s birthday. We made cranes like crazy at first, but then the day to day bustle of trying to get projects completed midterm progress reports and all that stuff kind of slowed progress. Eventually, I announced on a Monday, that the coming Friday would be our last day to make the cranes before shipping the box to you. We still had 628 cranes to make. It seemed pretty impossible that we would get to 1000 by Friday and I had resigned myself to thinking that I would just send as many as we had made, 1000 or not, because it was the thought that counts. We tried to figure out the math of how many people we needed to make a certain amount of cranes each day in order to hit 1000. It still seemed daunting.

However, the next morning, one of my students walked in with 500 cranes that she had made overnight. She said she couldn’t bear the thought of us not getting to 1000 so she made as many cranes as she could. It was amazing. I was so taken by the thought and effort that this girl had put into us reaching our goal for Peyton. With renewed hope, the students and I knew we could make 128 before the end of the week. We hit our goal of 1000 the next day. it was unbelievable that not only had we hit 1000, but that my goal of making these for Peytonâ€¦my drive and hope that somehow she could be cured, became their goal and their hope as well. And when we had completed all of the cranes, they wanted to make one large crane and have all the students sign it who had contributed to making the cranes. Some of them wrote messages to Peyton. They believe she can and will get better and you can see that in their messages to her. They are so excited to have done this for Peyton and I am so glad to not only have been able to reach my goal of 1000 paper cranes for Peyton, but also to have been a part of a group of sweet little kids who want so badly for their efforts to make Peyton better, just like I do. 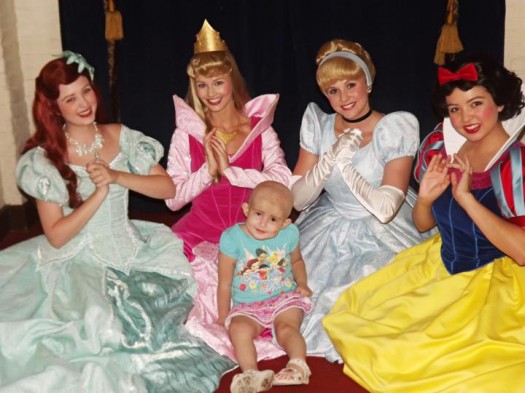 Peyton in Disney World meeting the princesses: A group of amazing people raised the money to send her as she was not yet eligible for Make-A-Wish. Over Thanksgiving (USA) week, she was granted a wish and returned to Disney World a second time.

I met both Melissa (Peyton’s mother) and Kristen (the great crane maker) in an online mothers group. Most of us in the group have known each other over 3 1/2 years now and have supported each other through the good, the not-so-good, and the unthinkable. Though I have only met a few of My Girls “in real life,” I consider each and every one of them a true friend and hope one day I will meet them ALL.

I am still holding hope that by some miracle, perhaps even as a result of the 1000 cranes made with love, Peyton will get better. Miracles happen every day and I’m praying one of those is being saved for this beautiful little girl.

Please, keep Peyton and her family in your thoughts and prayers.