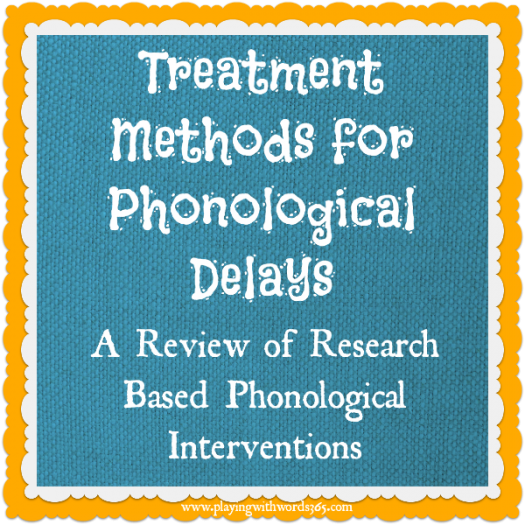 I have to preface this by telling you all thatÂ I am no expert on phonological treatment methods but that I do have quite a bit of experience treating them. What I mean, is that though I read a LOT of research on phonological treatments in grad school..that wasÂ a while ago and it wasÂ so terribly boring that I don’t remember much. But working with preschoolers, I do have a lot of hands on experience and clinical knowledge (and I have gone back and refreshed my memory a bit so I could write this). So for the purpose of this little post, I am going to be givingÂ very basic descriptions of different approaches. If you wish to read more about the different approaches, I encourage you to do your own research and reading. Also this is not an exhaustive list by any means.

Â for explaining this in a simple manner). Let’s review what these are before we get started:

Distinctive Features:Â These refer to the articulatory and acoustic properties of the sounds (phonemes) in our language. All sounds are made up of different articulatory and acoustic properties that together make the phoneme “sound” the way it does. If you are as SLP, the terms voice, place and manner should sound familiar to you, no? This is what we are taking about. Some sounds are voiced, while others are not. Some sounds require the tongue to move high and back and other sounds require the tongue to be in the front of the mouth. Some sounds require sustained airflow while other sounds are produced by actually stopping the airflow. Â Phonological interventions that use distinctive features as a framework for therapy utilize these distinctive feature patterns to determine the targets for therapy.

Phonological Processes:Â They are theÂ typical patterns of how a child simplifies his speech (so â€œnormalâ€ speech sound errors) as he learn to speak. A child is not born being able to produce all the sounds and sound patterns of his/her language. As a child is learning how to speak English, he will simplify sounds and sound patterns. For example, a young child will simplify the word â€œbottleâ€ to something like â€œbaba.â€ A young child may also say â€œgoggieâ€ for â€œdoggie,â€ â€œsueâ€ for â€œshoe,â€ or â€œnailâ€ for â€œsnail.â€Â Phonological processes, then, are the normal patterns of simplification all children use as they are learning to speak. You can read more about phonological processesÂ HERE.

Let’s talk about some of the approaches used to treat phonological delays.

Contrast Approaches {Based on Distinctive Features}

This method was developed for children with mild-moderate phonological delays. Minimal pairs are words that differ by only ONE phoneme (one phonetic feature) in the same position of the word. Typically in minimal pair therapy, you contrast the target sound with the erred sound (or omission if the child omits the sound). So let’s say you have a client who fronts his /k/ to a /t/ you might contrast words like car vs tar or call vs. tall. You want the child to understand that when they say the sound incorrectly, it actually changes the words meaning.

This treatment method was developed by Judith Gierut and colleagues at Indiana University and was developed for children with highly unintelligible speech (moderate to severe phonological delays).Â Rather than use contrasts that differ by just one phonetic feature (like in minimal pairs) this method tries to contrast words that differ by many (maximally) distinctive features. In addition, in this therapy method you contrast two sounds that are absent from the child’s inventory (i.e the child does not yet use at all) rather than contrasting the target with the error like in minimal pairs. The idea of this therapy is toÂ change a child’s entire phonological system and try to do so in the shortest amount of time possible. It is based on the theory that targeting more complex phonemes will result in the greatest change in the entire phonological system. More complex phonemes are acquired later (later developing) & less stimulable and the Â most change occurs when two unknown (errored) sounds are targeted together. You can read more about this method in Gierut’s research paper HERE.

This therapy was developed by Dr. Lynn Williams and is intended (again) for children with highly unintelligible speech. It is kinda like a hybrid of the two methods above but with its own twists. In this intervention several targets are contrasted at once with the erred sound. This particular method is aimed at children who have a phoneme collapse. What is a phoneme collapse? When a child is using one phoneme as a substitution for MANY different sounds. These are the kids that seem to use only a few phonemes at all. Lynn Williams actually explains this therapy Â HEREÂ …I suggest you head over and check it out and you can also read about this method HERE.

This method was also developed byÂ Judith Gierut and seems pretty similar to her other method Maximal Opposition Therapy. In this therapy method, two target sounds are targeted at the same time and are contrasted, rather than one sound targeted and contrasted with the error sound as in the maximal oppositions approach.

OK now that you’ve read all this, you can head over to Caroline Bowen’s site and check outÂ her descriptions and her chart that compares all these methodsÂ and be sure to check out her 10 Points To Consider In Intervention towards the end.

This method was developed by Barbara Hodson & E. Paden and was developed for use with highly unintelligible children.Â This therapy is based on the theory of how children naturally acquire their phonologic system…in a gradual and cyclic fashion….and in a developmental sequence. Like the other phonological approaches described above, this approach also uses whole words to target the phonological system but unlike the methods above, this method does not use contrasting pairs. Rather, around 5 target words are chosen and drilled for 60 minute intervals to target the error patterns (phonological processes) that are causing the child to be unintelligible. In this method, the use of auditory bombardment is emphasized and targets are worked on for a set time period rather than until a set criterion has been reached.

You can read more about cycles in this article for the ASHA Leader written by Hodson herself. However I HIGHLY recommend you pick up her book Evaluating & Enhancing Children’s Phonological Systems: Research & Theory to Practice

I must confess I know nothing about this approach. Caroline Bowen explains this therapy better than I could. She says…

MetaphonÂ (Dean & Howell, 1986; Dean, Howell, Hill & Waters, 1990; Dean, Howell, Waters & Reid, 1995) is based on the principle that homophony motivates phonemic change.Phonological analysis is performed using the test in theÂ Metaphon Resource PackÂ (or the phonological assessment of choice) and errors are described in terms of phonological processes. Target vs. substitute sound pairs are selected for treatment. Feature contrasts are usually minimal or near-minimal. The essence ofÂ MetaphonÂ is in two overlapping treatment phases followed by a discrete final phase.

So Which One is Best?

Well…um….so….from what I have read…we don’t know. My personal opinion is that there is no one-size-fits-all approach and that rather there may be some approaches that work better for some children. Barbara Williams Hodson sums it up here fromÂ Enhancing Phonological Patterns of Young Children With Highly Unintelligible SpeechÂ that was published in the ASHA Leader in April 2011:

There is consensus among SLPs that treatments for speech-sound disorders are successful. Baker and McLeod (2010) used the levels-of-evidence system selected by ASHA (adapted from the Scottish Intercollegiate Guideline Network) to review 134 studies. One of their observations was that comparative studies are generally lacking. A great need exists for a large, well-designed controlled experimental study comparing outcomes of various interventions for children with highly unintelligible speech. The number of participants in each treatment group needs to be large because of the heterogeneity of clients with speech-sound disorders (e.g., Harbers, Paden, & Halle, 1999). Ideally, this study should be conducted by investigators independent of the individuals who created these approaches to minimize actual bias or even the appearance of bias. It is critical, however, that the approach creators be consultants for purposes of fidelity.

So basically…like I said we don’t know. More research is needed.

What Do I Use?

Great question! I mostly uses Cycles and Minimal pairs. But I’ll go over more in the next (and last) installment of this series!

Check out the other parts to this series by goingÂ HERE.