Recently I got to see a bunch of my mom’s friends that I hadn’t seen for a couple years. In fact this was the first time they got to meet my youngest, Ev. We were talking about how he isn’t much of a talker but that he has nearly 50 signs that he uses regularly and that he makes up his own signs. One of my mom’s friends asked me “Do you think he isn’t talking because you taught him sign language?”

This is a pretty common question. So does teaching your baby sign language delay his speech? The simple answer:

NO. There is no evidence to support that teaching sign language delays speech. In fact, the opposite may be true.

Dr. Linda AcredoloÂ  and Dr. Susan Goodwyn have conducted numerous studies over the last 20 years on the use of sign language with hearing infants. One of these studies was funded by the National Institutes of Health and had the following outcomes (as summarized on theÂ Baby Signs website)

Results of the study revealed that 24-month-old babies using baby sign language were on average talking more like 27- or 28-month-olds, representing more than a three-month advantage over the non-signers. The babies using baby sign language were also putting together significantly longer sentences. In addition, 36-month-old signers on average were talking like 47-month-olds, putting them almost a full year ahead of their average age mates. At 8 years, those who had used sign language as babies scored an average of 12 points higher in IQ on the WISC-III than their non-signing peers. 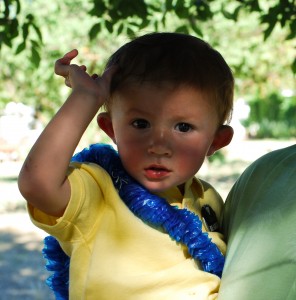 My Ev signing “horse” at a ranch

As you can see, in the study above the children were actually speaking better than their peers who were not taught sign language and were performing higher on IQ tests. Sign language is an integral part of many different programs around the country (and world) with positive results. To read more about the research in using signing with hearing infants and toddlers, see the information on theÂ Baby Signs website.

However, if you start talking to people about this topic, you will find people that will claim that they taught their child sign and their child’s speech was delayed. Well…it is more likely that the child would have had a speech delay with or without the signing. At least with signing, the child had a way to communicate! Children with speech delays who have no other way to communicate often become very frustrated when attempting to communicate their wants and needs, which can result in tantrums and lots of tears…for everyone involved.

Simple: It is a myth that teaching your baby, toddler, or speech delayed child sign language will delay his speech.

So don’t let this myth stop you from signing to your little one!