The world of special needs has its own language. All the terms can be very confusing as you first begin your travels there. Here are some explanations of “the lingo”, or the various terms, associated with speech and language skills. (This page is a work in progress) 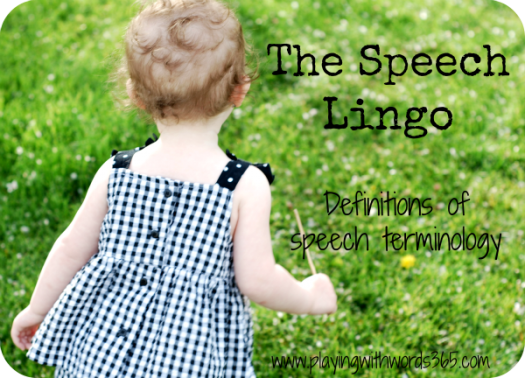 Articulation: Articulation is the physical ability to move the tongue, lips, jaw and palate (known as the articulators) to produce individual speech sounds which we call phonemes. For example, to articulate the /b/ sound, we need to inhale, then while exhaling we need to turn our voice on, bring our slightly tensed lips together to stop and build up the airflow, and then release the airflow by parting our lips. You can read more about articulation development and delays HERE.

Articulation Delay/Disorder:Â  An articulation delay/disorder is when a child has not mastered age appropriate sounds in the typical time frame. This is characterized by the child substituting, omitting, adding or distorting speech sounds. You can read more about articulation development and disorders HERE

Augmentative and Alternative Communication (AAC): Augmentative and Alternative Communication, also known simply as AAC, refers to “…all forms of communication (other than oral speech) that are used to express thoughts, needs, wants, and ideas. We all use AAC when we make facial expressions or gestures, use symbols or pictures, or write” (ASHA Website). When SLPs are working with children, our number one goal is alwaysÂ communication. Sometimes, a child may have such a severe delay/disorder, that traditional oral speech is not possible or is not practical. In these circumstances, an SLP may work with a child and his family to come up with an AAC system to use instead of speech. It is very important to note, that these AAC methods are not usedÂ to replace speech. In many circumstances, AAC is used as a bridge to speech. Children can use the AAC methods to communicate while still working on developing speech skills (when appropriate). You can learn more about AAC onÂ ASHA’s site.

Babbling: Babbling refers to sounds and syllables an infant begins stringing together between 4-12 months of age. Babbling is referred to as a prelinguistic skill: meaning a skill that happens prior to the development of language and speech. There are actually three different types of babbling: Marginal, Reduplicated, and Nonreduplicated. You can read more about babbling HERE.

Childhood Apraxia of Speech: Childhood Apraxia of Speech, or CAS, is a motor speech disorder. Children with CAS have difficulty producing sounds, syllables and words. For reasons unknown, the brain has difficulty with planning and executing the fine motor movements needed for speech. The child knows what he wants to say, but the brain is having difficulty coordinating or â€œtalking toâ€ if you will, the parts of the parts of the body that are used to produce speech sounds (i.e. the vocal folds, lips, jaw, tongue and palate). Basically the part of the brain that is responsible for controlling the parts of the body responsible for speech production is either not fully developed or damaged. CAS is NOT due to muscle weakness or paralysis (which is seen in another motor speech disorder, dyarthria). To learn more about CAS, click HERE.

Delay or Disorder: Technically, a delay would refer to a child whose development is following the â€œtypical or normal patternsâ€ but she is developing those skills at a slower rate than her peers. A disorder then, would be classified as a child whose development is NOT following the â€œtypical or normalâ€ patterns (i.e. abnormally). However, some people use these terms interchangeably or two professionals may not totally agree on whether a childâ€™s development is delayed or disordered. But typically, a delay=normal development at a slower rate than expected and disorder=abnormal development.

Parallel talk: Parallel talk is similar to self talk, except rather than talking about what you are seeing, hearing or doing you are talking about your child is seeing, hearing or doing. So, When your child is playing with blocks you might say “Wow! You just built a tower! Oh you have the blue block. You threw the red block! Oh let’s see how many blocks there are, one, two, three blocks!” Notice in parallel talk, you are not asking questions of the child but rather are just modeling language.

Descriptions: This is a strategy that can be used to help children learn language (like Self Talk and Parallel Talk). This is when you simply describe an object that your child is playing with or looking at. Say you are at the farm…you may label and describe the different animals to your child: “Look at that cow! He is white with black spots!” or “There is a pig. He is big, fat and pink and likes rolling in mud.” You can learn more about using descriptions and other strategies to help children learn language HERE.

Dysarthria: Dysarthria is a motor speech disorder resulting in weakness, paralysis or incoordination in the muscles needed for producing speech (jaw, lips, tongue, palate, and respiratory system). You can learn more about dysarthria HERE

Expansions: This is a strategy that can be used to help children learn language. Expansions are when you take the words your child says about what they see and do and repeat them while adding in missing words/grammar. Another way to look at it, is repeating back the “child-like” sentences back to your child using more “adult” language. By doing this, you are repeating and expanding your child’s language without directly “correcting” him/her. You can learn more about using expansions and other strategies to help children learn languageÂ HERE.

Extensions/Expansions Plus: This is a strategy that can be used to help children learn language. These are similar to expansions, but one more step up. In extensions, or otherwise known as expansions plus, you not only are repeating and expanding your child’s language, but you will also be adding or extensions new information. For example, if your child says “Car go!” you could say “Yes the car is going. The car is going fast.” You can learn more about using extensions and other strategies to help children learn languageÂ HERE.

Language: While speech involves the physical motor ability to talk, language is a symbolic, rule governed system used to convey a message. In English, the symbols can be words, either spoken or written. We also have gestural symbols, like shrugging our shoulders to indicate “I don’t know” or waving to indicate “Bye Bye” or the raising of our eye brows to indicate that we are surprised by something. You can read more about the difference between speech and language HERE.

Lisp: A lisp refers to an articulation disorder where a child is having difficulty producing the /s/ and /z/ phonemes, and sometimes has difficulties with the sh, ch and J sounds as well. There are four main types of lisps, characterized by their specific substitution patters: the interdental/frontal lisp, the dentalized lisp, and lateral lisp, and the palatal lisp. You can read more about lisps HERE

Parallel talk: This is a strategy that can be used to help children learn language. Parallel talk is similar to self talk, except rather than talking about what you are seeing, hearing or doing you are talking about your child is seeing, hearing or doing. So, When your child is playing with blocks you might say “Wow! You just built a tower! Oh you have the blue block. You threw the red block!Â  You can learn more about using parallel talk and other strategies to help children learn language HERE.

Phonological Processes: They are the typical patterns of how a child simplifies his speech (so “normal” speech sound errors) as he learn to speak. A child is not born being able to produce all the sounds and sound patterns of his/her language. As a child is learning how to speak English, he will simplify sounds and sound patterns. For example, a young child will simplify the word â€œbottleâ€ to something like â€œbaba.â€ A young child may also say â€œgoggieâ€ for â€œdoggie,â€ â€œsueâ€ for â€œshoe,â€ or â€œnailâ€ for â€œsnail.â€ Phonological processes, then, are the normal patterns of simplification all children use as they are learning to speak. You can read more about phonological processes HERE.

Phonology: Phonology is the study of how speech sounds (i.e. phonemes) are organized and used in a language. This includes the study of the individual sounds of a language (phonemes), their patterns, how they are learned (phonological development) and how they work and go together.

Pragmatic/Social language: Social/ pragmatic language refers to the way an individual uses language to communicate and involves three major communication skills: using language to communicate in different ways (like greeting others, requesting, protesting, asking questions to gain information, etc), changing language according to the people or place it is being used (i.e. we speak differently to a child han we do to an adult; we speak differently inside vs. outside), and following the rules for conversation (taking turns in conversation, staying on topic, using and understanding verbal and nonverbal cues, etc). SLPs can work with your child You can learn more about social/pragmatic language on theÂ American Speech-Langauge Hearing Association’s site.

Repetition: This is a strategy that can be used to help children learn language.This is for children who are speaking at least in single words, to help provide correct models for articulation. You simply repeat back the word he/she said incorrectly, the correct way. For example if your child says “wabbit” for “rabbit” you would repeat back that word to him, while emphasizing the /r/ sound in the word. You can learn more about using repetitions and other strategies to help children learn languageÂ HERE.

Self Talk: This is a strategy that can be used to help children learn language. This is when you are using short sentences to talk about what you are seeing. hearing or doing when you are with your child. For example, when you are making cookies you may say “Mommy is making cookies! I am putting the chocolate chips in the batter! I am stirring. I am going to put them in the oven” and so on. You can learn more about using self talk and other strategies to help children learn language HERE.

Speech: When we speech pathologists refer to the term speech we are referring to three things: articulation/phonological skills, speech fluency and voice.We are looking at a child’s ability to: Physically produce the individual sounds and sound patterns of his/her language (Articulation), produce speech with appropriate rhythm, and free of Stuttering behavior, produce speech with an appropriateÂ vocal quality for his/her age and sex. You can read more about the difference between speech and language HERE.

Stuttering: Stuttering is a communication disorder that effects speech fluency. It is characterized by breaks in the flow of speech referred to as disfluencies and typically begins in childhood. Everyone experiences disfluencies in their speech.Â  Some disfluencies are totally normal but having too many can actually significantly affect one’s ability to communicate. In stuttering, we most often see the following types of primary behaviors: repetitions, prolongations, interjections, and blocks. We may also see secondary behaviors, typically in more severe cases of stuttering such as tension in the neck, shoulders, face, jaw, chest; eye blinks, nose flaring, other odd facial movements; clenched fists, stomping of feet; jerking or other unusual motor movements in arms, hands, legs, feet. You can read more about stuttering HERE.