If you are a parent of a baby or toddler (or currently pregnant) you probably have heard of “baby sign.” But what exactly is it and why would you want to use sign language with your child? How? Where and when should you start? This is one of many posts I am writing this month on the topic of sign language and why I think it’s awesome for babies and children of all ages to learn it!

Before you begin using sign language with your child, it’s a good idea to know exactly what it is and maybe more importantly, what it isn’t.

What is a language? Before I start talking about sign language, I first want to define the term language.Â While speech involves the physical motor ability to talk, language is a symbolic, rule governed system used to convey a message. In English, the symbols can be words, either spoken or written. We also have gestural symbols, like shrugging our shoulders to indicate â€œI donâ€™t knowâ€ or waving to indicate â€œBye Byeâ€ or the raising of our eye brows to indicate that we are surprised by something.

What is sign language? Sign language then, refers to a language that uses gestures, manual signs with the hands, facial expressions and body language to convey a message. There are different kinds of sign language, with the most commonly used in the US being American Sign Language. 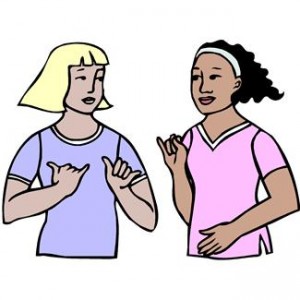 What is American Sign Language? American Sign Language, or ASL, is the most commonly used sign language in the US among deaf individuals. ASL is NOT a gestural form of the English you and I speak. ASL is it’s own language with its own rules, grammar, and syntax. For example, word order is ASL can vary greatly from English and ASL does not use word endings like “ing” “ed” or “est”. When translating English to ASL, not every word is signed as its not necessary to use some words like ‘the” or “an”. There is, however, another form of sign language called Singing Exact English or SEE Sign. In SEE Sign, every word and word part is signed so it is a true visual representation of American English.

Why use sign language with babies? I’ll be talking more about the why next!