Welcome to the first post in my new long term series “Why Does My Child___? {And is it normal?}” For more information about this series and how you can help contribute, read the intro post HERE.Â

I remember a couple years ago a friend of mine was talking about how she wondered why her son said “wa wa” for the word water when she herself only referred to water as, well, water. I didn’t go into the why then, but I’ve been noticing that my own son Ev, 23 months, has been doing a lot of this speech pattern lately and I thought it would make a great first post in my new series. So….. 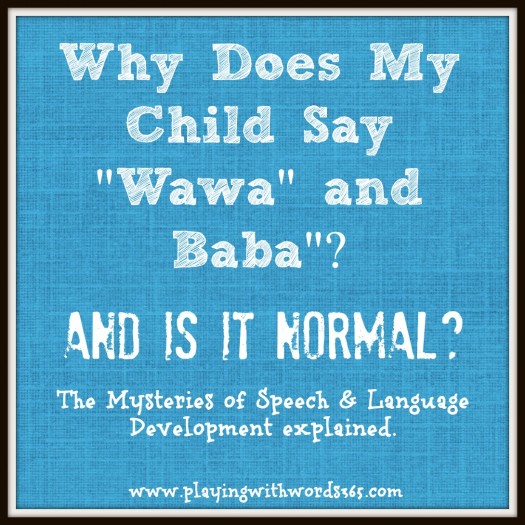 Your child says “wawa” for water, “baba” for bottle because he does not yet have the skills to say “water” and “bottle” so he uses the phonological process ofÂ reduplicationÂ to simplify the word.Â ReduplicationÂ is when your child repeats a syllable or part of a syllable of the word he wants so say. It doesn’t always have to be the first syllable either! My son Ev, 23 months, uses this processÂ a lot in his speech.Â For example, our dog’s name is Ainsley, but he calls him “zee-zee.” He is using the final syllable of the dogs name (minus the “l” because he can’t say it yet) and repeating it to say “zee-zee” for Ainsley.

This process is completely normal in toddlers! So don’t sweat it! It is a normal part of speech development. However, we typically see this process go away around age three.

What words do YOUR child simplify in this way? I want to hear!