You’ve heard it before: “He has a lisp.” But what exactly is a lisp? Did you know there is more than one type? 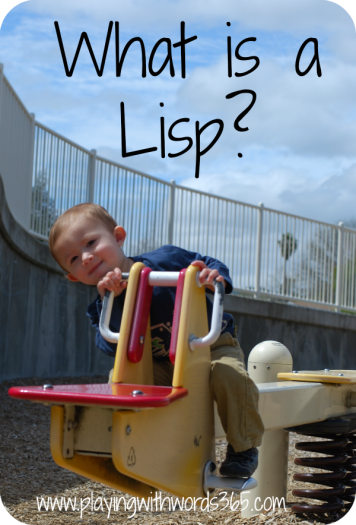 What is a lisp?

A lisp refers to an articulation disorder where a child is having difficulty producing the /s/ and /z/ phonemes, and sometimes has difficulties with the sh, ch and J sounds as well. There are four main types of lisps, characterized by their specific substitution patters: the interdental/frontal lisp, the dentalized lisp, the lateral lisp, and the palatal lisp.

Before I define the different types of lisps, first you need to understand the correct production of the /s/ and /z/ phonemes. The /s/ and /z/ sounds are produced in the same way in the mouth: The tongue is behind the teeth with either the tongue tip behind the top teeth, or behind the bottom teeth (with some people even producing it with the tongue tip more in the middle). The sides of the tongue are raised to touch the upper molars. When this is done the tongue forms a groove down the middle where the air flows through and thus produces the sound. Though the /s/ and /z/ are produced in the same manner in the mouth, what makes them sound different from one another is that when we produce an /s/, we turn our voices OFF, and when we produce a /z/ we turn our voice ON. An /s/ is referred to, then, as a voiceless sound (as are /k/, /t/, and /p/) and the /z/ a voiced sound (just like /g/, /d/, and /b/). The different lisps are characterized by the specific error pattern, or the way the sounds are produced incorrectly.

Lisps that we DO see in typical speech development:

Lisps we DO NOT see in typical speech development:

When is a lisp no longer developmentally appropriate?

Lateral and Palatal Iisps are never considered normal so if you suspect your child has one of these lisps, I suggest making an appointment for an assessment with a speech language pathologist to confirm and discuss when intervention should begin. Therapy for these lisps could start as early as age three or four, depending on the child’s maturity and ability to follow directions (sometimes these lisps can be tricky to remediate). Some student’s may not be ready until a little older. The speech-language pathologist will be able to determine when the child is ready.

Unlike lateral and palatal lisps, interdental/frontal and dentalized lisps are seen in “normal” development and are developmentally appropriate until a “certain age.” So what age would that be?Â

Well that is where it gets complicated because not all SLPs agree on the “magic age” in which a interdental/frontal or dentalized lisp is no longer “developmentally appropriate” and is now “delayed.” Caroline Bowen, PhD and SLP believes that these lisps are only “normal” until about age 4 1/2 and is an advocate for treating these lisps earlier vs later as the older the child is, the harder the “habbit” of lisping can be to change. She believes if the child is ready, that soon after age 4 1/2-5 is a good time to begin intervention.

However, many SLPs all over the country believe in waiting until closer to age 7 or 8, based on several sets of developmental normative data that indicate that the upper range for mastery for the /s/ and /z/ sounds is age 7-8 and therefore the sound would not be “delayed” until after that age range(i.e. Sanders 1972, a set of norms used widely by SLPs when determining when a child should receive intervention for articulation delays).Â  However some developmental data by Goldman Fristoe Test of Articulation-2 (2000) found that 85% of children had mastered the /s/ by age 5. To view the chart I created based on several sets of developmental norms, click HERE.

What do *I* think? Personally, I tend to sway towards earlier the better…but it depends on the individual child. I look at the child’s ability to produce the sounds correctly (called stimulability), the child’s maturity and ability to follow directions, the severity of the lisp, and if I am treating in the schools- the way it affecting the child’s ability to access and participate in his curriculum (including the “hidden curriculum” which refers to his/her ability to access and participate socially in his education…i.e. is the lisp generating negative attention with peers?). I have worked on frontal lisps in 4 1/2 year olds and have waited on others until closer to 6. I personally prefer not to wait until after 6 whenever possible.

What causes a lisp?

Like other many other articulation disorders, the cause is typically unknown. There are some SLPs who believe that some lisps are caused by some kind of weakness in the speech musculature, while others do not. In some cases a child may also have a tongue thrust along with their interdental/frontal lisp. A tongue thrust is actually an abnormal swallow pattern that causes the tongue to move too far forward during swallowing. A tongue thrust then can also effect a child’s speech by causing a lisp. If you suspect your child may have a tongue thrust, discuss this with your child’s dentist and pediatrician. A speech-language pathologist can also help to determine if your child has a tongue thrust.

What can I do to help my child?

If your child is producing her /s/ and /z/ sounds interdentally or dentalized there are a couple fun games you could play with our child to try to teach her the correct placement. I will be posting about these methods in the future, so check back!