I recently posed this question on my Facebook page:Â If you could give ONE recommendation/ piece of advice to another parent about speech/language development, what would it be? (This can be from SLP to a parent or parent to a parent)

The answers were AWESOME! I loved how we had a good mix of parent-to-parent and SLP-to-parent suggestions. The conversation over there inspired me to share a little research on how our words shape our children’s speech, language and literacy skills and share the most important basic thing you can do to help your child’s language development from the day he is born.Â 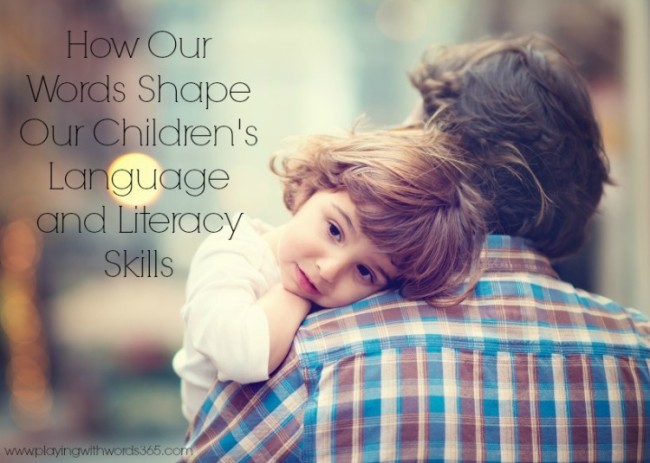 Numerous studies have indicated that a strong language base is key to a child’s later academic success.Â In their groundbreaking longitudinal study, researchers Betty Hart and Todd Risley (1995) followed 42 children from varying socioeconomic backgrounds to study the effects of adult to child talking on a child’s later speech, language, and literacy development.Â The researchers recorded one full hour of parent-child interactions every month in the home beginning inÂ infancy until their third birthday, and followed up when the children were between 9 and 10. They found theÂ quantity of words spokenÂ to a childÂ in the first three years of lifeÂ wereÂ strongly associated with a child’s language skills, vocabulary size and IQ later in life.Â

New research coming out of StanfordÂ confirms Hart & Risley’s findings. Â Anne Fernald’s research is finding that language discrepancies can be evident as early as 18 months between groups of children exposed to more vs. less language. Her research also indicates it’s the words spoken directly to a child that are responsible for vocabulary growth, not words the child passively hears like while watching television or by being around adults conversing to one another.

Hart and Risley had another interesting finding: Those children exposed toÂ more positive feedbackÂ and statements in relation to negative feedbackÂ had the highest language skills at age three and beyond.

Rowe wasn’t the only one to discover the importance of conversation. In another study conducted by the National Institutes for Children’s Health and Human Development, researchers followed 1200 children in several cities in the US from birth and found thatÂ children who were engaged more in conversation by their caregivers or teachers knew more colors, letters and shapes at age threeÂ than children who were engaged less in conversation in those first few years of life.

What to Talk About?

Does the topic of conversation matter? Absolutely. Â It’s all aboutÂ what your child is interested in.Â This sums it up nicely, from one of my favorite books (Affiliate link->) Einstein Never Used Flashcards: How Our Children Really Learn–and Why They Need to Play More and Memorize Less

“When parents build upon the child’s interest and use it as the basis for conversations, they stimulate language growth. A large body of data tells us that this pays off in a big way. In fact, research shows that even children as young as 18 months have higher vocabularies than their peers if their parents talk with them about objects and actions that the children are interested in. These are the same children who have larger vocabularies at the beginning of school and higher reading and mathematical levels in kindergarten and first grade.” -pg 89

Another Variable to Language Learning

Unfortunately, another finding from these studies mentioned above was that children of lower socio economic status (SES) tended to hear significantly less words than those in higher SES homes. In fact, Hart and Risley found children of low SES heard 30 million less words by age 3 than children in high SES. As mentioned, the the newest research by Stanford confirms this, showing that this gap can be evident as early as 18 months. Amazingly, brain studies can actually see the difference in the brains of these two groups of children, with the children exposed to more language having larger language areas of the brain than those exposed to significantly less language. Â Further evidence that the quantity and quality of our interactions with our infants and toddlers is so very important!

There is hope: With proper interventions, there is evidence that parent education and training can help overcome the 30 million word gap.

What I Want You to Take Away From All This 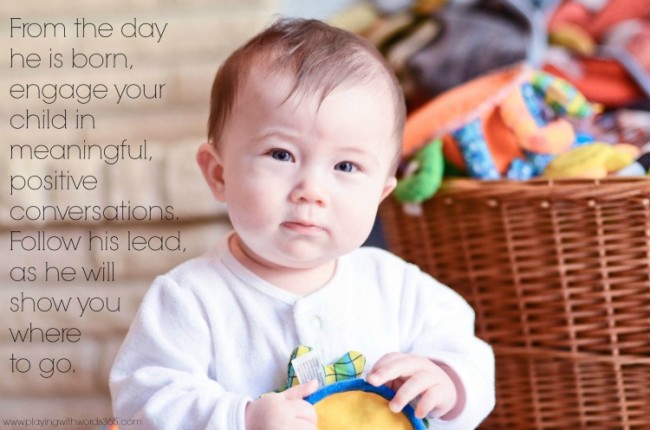 When Talking Is Not Enough

I recently posted about the fact that you can do EVERYTHING “right” and yet, still have a child with speech and language delays. I am living proof of this, as I am a speech pathologist,Â an expert in communication, and yet I have a son with a mild speech delay. Though talking to your child is by FAR the BEST thing you can do for your child from birth, thereÂ are many other variables at hand and I’ll be talking more about this is an upcoming post. Sometimes, talking is NOT enough. But, it IS so very important!Â

Rowe, M. (2012). A Longitudinal Investigation of the Role of Quantity and Quality of Child-Directed Speech in Vocabulary Development.Â Child Development: 83(5), 1762-1774.