Welcome to a new installment of my “Why Does My Child____ {And is it Normal?}” series. You can read more about this series HERE.Â

I have gotten this question many times before. I must admit…the first few times I got this question it threw me. I had to think hard of what the person was really referring to. Interestingly enough, my own son is anÂ expert at this. So what is it? Is it normal? 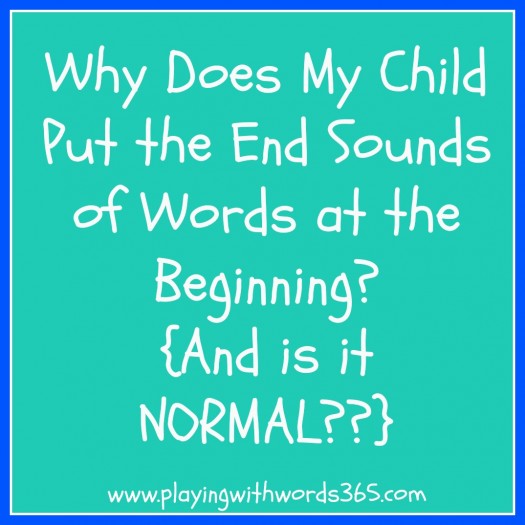 So why does my kid put the end sounds of words at the beginning then?

When your child is saying “guck” for truck (or duck or stuck as my own son does) or “tat” for cat he is taking a sound or a similar sound as the ending sound, and placing it at the beginning of the word. This pattern is referred to as assimilation (also known as harmony). Assimilation refers to when a sound starts to sound like a surrounding sound. Sometimes a child will put a beginning sound (or similar sound) of a word at the end of word also, like “kak” for cat or “beb” for bed.

YES! This is another phonological process that is quite common and very normal in toddlers. We typically see this process disappear around age 3 years and 9 months, but you should see your child slowly “fixing” these errors over time, especially after he has turned three.

Does your child use this process at all in his speech?