Sound familiar? Have you noticed that your toddler will sometimes leave out syllables in some of his words? 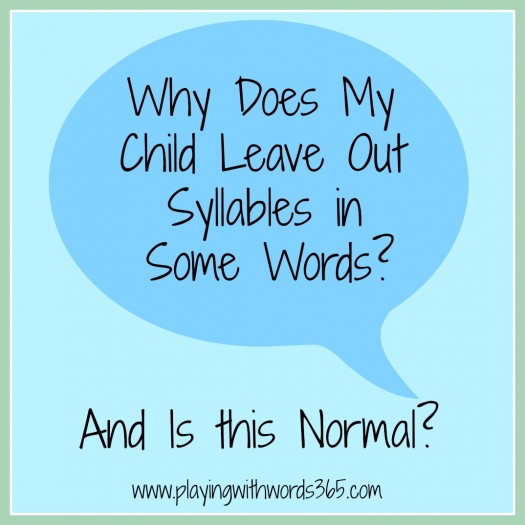 So Why Does My Child Leave Out Syllables in Words?

Your child is leaving the syllables out of some words because he is still mastering all the sounds in his language an he needs to simplify some of our “adult” speech in the process. The simplification process that is being used when your child ommits a syllable in a word here and there is called unstressed syllable deletion. What your child is doing, is omitting a non stressed syllable in a word. A Non stressed syllable is one that is notÂ strssed as much as others in the word and therefore does not hold as much meaning. So your child will say ‘puter for computer, nana for banana or efant for elephant. Notice how you can usually tell what the word is supposed to be, even though it is missing a syllable? That is the whole “unstressed” thing.

Like most other phonological processes, unstressed syllable deletion is a normal part of the development of speech. We generally see this process disappear by age 4, however some children will “hold onto” a few words and continue to produce them simplified and this too is normal. For example, Â I have known 4 year olds and even some 5 year olds who continue to use the word ‘puter for computer, but since the rest of their speech is within normal limits, it isn’t something to worry about. You can simply point out to them how to say the word correctly as it comes up in conversation.

What if my child leaves out syllables in a LOT of words?

Deleting syllables in a lot (like most) words IS a problem, however. Usually when children are doing this, they are also using many other simplification patterns together, making their speech hard to understand. Too much simplifying can be a sign of a more serious delay or disorder. If you have any concerns about your child’s speech and language development I encourage you to get a screening or assessment my a speech-language pathologist just to be sure.